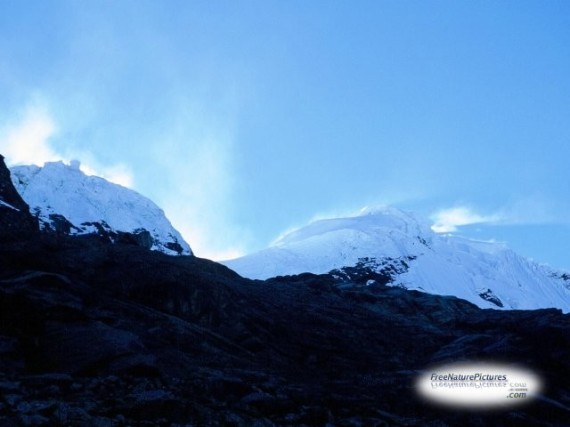 God redeems our souls out of all adversity

1 And when Saul’s son heard that Abner was dead in Hebron, he lost all courage, and all the Israelites were terrified. 2 Saul’s son had two men that were captains of troops: the name of the one was Baanah, and the name of the other Rechab, the sons of Rimmon a Beerothite, of the children of Benjamin: (Beeroth was considered part of Benjamin: 3 And the Beerothites fled to Gittaim, and were foreigners there until this day.) 4 And Jonathan, Saul’s son, had a son that was lame in both feet. He was five years old when the news of Saul and Jonathan came out of Jezreel, and his nurse picked him up, and ran: and as she hurried to flee, he fell and became lame. And his name was Mephibosheth.

5 And the sons of Rimmon the Beerothite, Rechab and Baanah, went and came in the heat of the day to the house of Ish-bosheth, who lay on a bed at noon. 6 And they came into the middle of the house bringing wheat; and they struck him under the fifth rib: and Rechab and Baanah his brother escaped. 7 For when they came into the house, he lay on his bed in his bedchamber. They struck him, killed him, beheaded him, and took his head, and got away through the Arabah all night. 8 And they brought the head of Ish-bosheth to David to Hebron, and said to the king, Behold the head of Ish-bosheth the son of Saul, your enemy that sought your life; the LORD has avenged my lord the king this day of Saul, and of his seed.

9 And David answered Rechab and Baanah his brother, the sons of Rimmon the Beerothite and said to them, As the LORD lives, who has redeemed my soul out of all adversity, 10 when someone told me saying, Behold, Saul is dead, thinking to have brought good news, I took hold of him and killed him in Ziklag, who thought that I would give him a reward for his news. 11 How much more, when wicked men have killed a righteous person in his own house on his bed? Shall I not now require his blood at your hand, and take you away from the earth? 12 And David commanded his young men, and they killed them, cut off their hands and their feet, and hanged them up over the pool in Hebron. But they took the head of Ish-bosheth, and buried it in the grave of Abner in Hebron.

1 Then all the tribes of Israel came to David to Hebron and spoke saying, Behold, we are your bone and your flesh. 2 Also in time past when Saul was king over us, you led the military in Israel: and the LORD said to you, You will shepherd my people Israel, and you will be a leader over Israel.

3 So all the elders of Israel came to the king to Hebron; and king David made a contract with them in Hebron before the LORD: and they anointed David king over Israel. 4 David was thirty years old when he began to reign, and he reigned forty years. 5 In Hebron he reigned over Judah seven years and six months: and in Jerusalem he reigned thirty-three years over all Israel and Judah.

6 And the king and his men went to Jerusalem to the Jebusites, the inhabitants of the land: who spoke to David saying, You cannot come in here. The blind and the lame can repel you: thinking, David cannot come in here. 7 Nevertheless David took the strong hold of Zion: the same is the city of David. 8 And David said on that day, Whoever gets up to the water tunnel, and strikes the Jebusites, and the lame and the blind, that are hated of David’s soul, he will be chief and captain. Therefore they said, The blind and the lame will not come into the house.

The LORD God of hosts was with David

9 So David dwelt in the fort, and called it the city of David. And David built round it from the citadel and inward.10 And David went on, and became great, and the LORD God of hosts was with him. 11 And Hiram king of Tyre sent messengers to David, and cedar trees, carpenters, and masons: and they built David a house. 12 And David perceived that the LORD had established him king over Israel, and that he had exalted his kingdom for his people Israel’s sake.

13 David took more concubines and wives to himself out of Jerusalem, after he came from Hebron: and more sons and daughters were born to David. 14 These are the names of those that were born to him in Jerusalem; Shammua, Shobab, Nathan, Solomon, 15 also Ibhar, Elishua, Nepheg, Japhia, 16 Elishama, Eliada, and Eliphalet.

17 But when the Philistines heard that they had anointed David king over Israel, they mobilized all their forces to find and capture him; when David heard of it, he went down to the stronghold. 18 The Philistines came and spread themselves in the valley of Rephaim. 19 And David asked the LORD saying, Shall I go up to the Philistines? Will you deliver them into my hand? And the LORD said to David, Go up: I will definitely deliver the Philistines into your hand.

20 And David came to Baal-perazim, and David struck them there and said, The LORD has burst forth on my enemies like a raging flood. So he called the name of that place Baal-perazim. 21 They left their images there, and David and his men burned them. 22 And the Philistines came again, and spread themselves in the valley of Rephaim. 23 And when David asked of the LORD, he said, Do not go up; but circle around behind them, and come upon them opposite the balsam trees. 24 When you hear the sound of marching in the tops of the balsam trees, then you will strike, for then the LORD will go out before you, to strike the army of the Philistines. 25 And David did so, as the LORD had commanded him; and struck down the Philistines from Geba until you come to Gazer.

The LORD of the armies dwells above the Cherubim

1 Again David gathered together all the chosen men of Israel, thirty thousand.

19 And he gave all the people, the whole multitude of Israel, to the women as well as men, to each one a cake of bread, and one of dates, and one of raisins. So all the people departed every one to his house. 20 Then David returned to bless his household. And Michal the daughter of Saul came out to meet David and said, How great was the king of Israel today, who was uncovered today before the eyes of the handmaids of his servants like one of the vain fellows openly uncovers himself! 21 And David said to Michal, It was before the LORD, which chose me over your father, and before all his house, to appoint me ruler over the people of the LORD, over Israel: so I danced before the LORD. 22 And I will be still more lightly esteemed than this, and will be humble in my own sight: and of the maidservants that you have spoken of, by them I will be held in honor. 23 Therefore Michal, the daughter of Saul, had no child until the day of her death.

God gives rest from all enemies

1 When the king lived in his house and the LORD had given him rest all around from all his enemies; 2 The king said to Nathan the prophet, See now, I live in a house of cedar, but the ark of God dwells within curtains. 3 And Nathan said to the king, Go, do all that is in your heart; for the LORD is with you.

4 And it happened that night, that the word of the LORD came to Nathan saying, 5 Go, tell my servant David, The LORD says this, Will you build me a house for my dwelling? 6 I have not lived in any house since the day I brought the children of Israel up out of Egypt, even to this day, but have moved about in a tent, a tabernacle. 7 In all the places where I have walked with all the children of Israel did I say to any of the tribes of Israel whom I commanded to shepherd my people Israel, Why have you not built me a house of cedar?

He took David from the lowest job to the highest

8  Now say to my servant David, This is what the LORD of hosts says, I took you from the sheepcote, from following the flock, to be ruler over my people, over Israel: 9 I was with you wherever you went, and have cut off all your enemies out of your sight, and have made you a great name, like the name of the great men that are in the earth. 10 Moreover I will appoint a place for my people Israel, and will plant them so that they may dwell in a place of their own, and move no more; the children of wickedness will no longer afflict them as before, 11 and as since the time that I commanded judges over my people Israel, and have caused you to rest from all your enemies. Also the LORD tells you that he will make you a house.

12 And when your days are fulfilled, and you lie with your fathers, I will raise up your seed after you, who will come from your loins, and I will establish his kingdom. 13 He will build a house for my name, and I will establish the throne of his kingdom forever. 14 I will be his father, and he will be my son. When he sins, I will discipline him with the rod of men, with the strokes of the children of men: 15 But my mercy will not depart from him, as I took it from Saul, whom I put away before you. 16 And your house and your kingdom will be established before you forever: your throne will be established forever.

17  According to all these words, and by all this vision, Nathan spoke this to David. 18 Then king David went in, and sat before the LORD and he said, Who am I, O Lord GOD? And what is my house that You have brought me to this? 19 And this was a small thing in your sight, O Lord GOD; for you have spoken of your servant’s house concerning the distant future also. And is this the custom of man, O Lord GOD? 20 What more can David say to you? For you, Lord GOD, know your servant. 21 For your word’s sake, and according to your own heart, you have done all these great things, to make them known to your servant. 22 You are great, O LORD God: there is none like you, neither is there any God beside you, according to all that we have heard with our ears.

23 And what one nation in the earth is like your people, like Israel, whom God went to redeem as a people to himself, and to make him a name, and to do for you great and awesome things for your land, before your people, which you redeemed to from Egypt, from the nations and their gods? 24 For you have confirmed to yourself your people Israel to be a people to you forever: and you, LORD, have become their God.