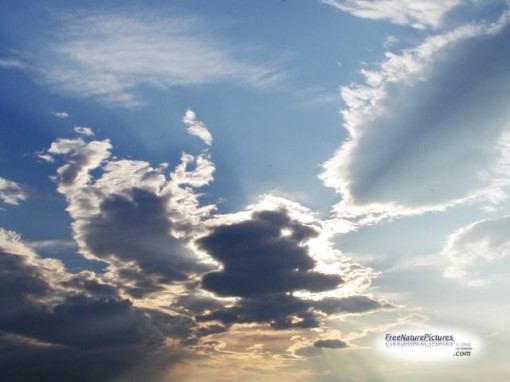 1 In the beginning of the reign of Jehoiakim, the son of Josiah, king of Judah, this word came to Jeremiah from the LORD, saying, 2 The Lord said this to me: Make for yourselves bonds and yokes, and put them on your neck, 3 and send them to the king of Edom, the king of Moab, the king of the Ammonites, the king of Tyre, and the king of Sidon, by the hand of the messengers who come to Jerusalem to Zedekiah king of Judah. 4 And command them to say to their masters, The LORD of hosts, the God of Israel says this, Say this to your masters: 5 I have made the earth, the man and the beast that are on the ground, by my great power and by my outstretched arm, and have given it to whom it seemed right in my eyes.

6 And now I have given all these lands into the hand of Nebuchadnezzar the king of Babylon, my servant; and the beasts of the field I have also given him to serve him. 7 So all nations will serve him and his son and his son's son, until the time of his land comes; and then many nations and great kings will make him serve them.

God preserves and blesses those who listen to Him

God pleads with us; He exposes liars

13 Why will you die, you and your people, by the sword, by the famine, and by the pestilence, as the LORD has spoken against the nation that will not serve the king of Babylon? 14 So do not listen to the words of the prophets who speak to you, saying, You will not serve the king of Babylon, for they prophesy a lie to you; 15 for I have not sent them, says the LORD, yet they prophesy a lie in My name, that I may drive you out, and that you may perish, you and the prophets who prophesy to you."

16 Also I spoke to the priests and to all this people, saying, The Lord says, Do not listen to the words of your prophets who prophesy to you, saying, Behold, the vessels of the Lord’s house will now shortly be brought back from Babylon; for they prophesy a lie to you. 17 Do not listen to them; serve the king of Babylon, and live! Why should this city be laid waste?

1 And it happened the same year, in the beginning of the reign of Zedekiah king of Judah, in the fourth year, and in the fifth month, that Hananiah the son of Azur, the prophet, who was of Gibeon, spoke to me in the house of the LORD, in the presence of the priests and of all the people, saying, 2 The Lord of hosts, the God of Israel, says, I have broken the yoke of the king of Babylon. 3 Within two full years I will return into this place all the articles of the Lord's house, that Nebuchadnezzar king of Babylon took away from this place, and carried them to Babylon: 4 And I will bring again to this place Jeconiah the son of Jehoiakim king of Judah, with all the captives of Judah, that went into Babylon, says the LORD: for I will break the yoke of the king of Babylon.

5 Then the prophet Jeremiah said to the prophet Hananiah in the presence of the priests, and in the presence of all the people that stood in the house of the LORD, 6 Even the prophet Jeremiah said, Amen: the LORD do so: the LORD perform your words that you have prophesied, to bring again the vessels of the Lord's house, and all that is carried away captive, from Babylon into this place. 7 Now hear this word that I speak in your ears, and in the ears of all the people; 8 The prophets that have been before me and before you of old prophesied both against many countries, and against great kingdoms, of war, and of evil, and of pestilence. 9 The prophet that prophesied of peace, when the word of the prophet come to pass, then the prophet will be known, that the LORD has truly sent him.

14 For the LORD of hosts, the God of Israel says; I have put a yoke of iron on the neck of all these nations, that they may serve Nebuchadnezzar king of Babylon; and they will serve him: and I have given him the beasts of the field also. 15 Then the prophet Jeremiah said to Hananiah the prophet, Now listen, Hananiah; The LORD has not sent you; you make this people trust in a lie. 16 Therefore the LORD says this; Behold, I will cast you off the face of the earth: this year you will die, because you have taught revolt against the LORD. 17 So Hananiah the prophet died the same year in the seventh month.

The Lord continues His blessing regardless of circumstances

5 Build yourselves houses, and live in them; and plant gardens, and eat their fruit; 6 Take wives, and beget sons and daughters; and take wives for your sons, and give your daughters to husbands, that they may bear sons and daughters; that you may be increased there, and not diminished. 7 And seek the peace of the city where I have caused you to be carried away captive, and pray to the LORD for it: for in its peace you will have peace.

8 The LORD of hosts, the God of Israel says this; Do not let your prophets and your diviners that are among you, deceive you, nor listen to your dreams which you cause to be dreamed. 9 For they prophesy falsely to you in my name: I have not sent them, says the LORD. 10 For thus says the LORD, After seventy years are accomplished at Babylon I will visit you, and perform my good word toward you, in causing you to return to this place.

11 For I know the plans that I think toward you, says the LORD, thoughts of peace, and not of evil, to give you a future and a hope. 12 Then you will call on me, and you will go and pray to me, and I will listen to you. 13 And you will seek me, and find me, when you search for me with all your heart. 14 And I will be found by you, says the LORD: and I will turn away your captivity, and I will gather you from all the nations, and from all the places where I have driven you, says the LORD; and I will bring you again into the place from where I caused you to be carried away captive. 15 Because you have said, The LORD has raised us up prophets in Babylon; 16 Know that the LORD of the king that sits on the throne of David says, and of all the people that dwell in this city, and of your brothers that have not gone with you into captivity; 17 The Lord of hosts says this; Behold, I am sending on them the sword, the famine, and the pestilence, and will make them like vile figs, that cannot be eaten, they are so evil. 18 And I will persecute them with the sword, with the famine, and with the pestilence, and will deliver them to be removed to all the kingdoms of the earth, to be a curse, and an astonishment, and a hissing, and a reproach, among all the nations where I have driven them: 19 Because they have not listened to my words, says the LORD, which I sent to them by my servants the prophets, rising early and sending them; but you would not hear, says the LORD.

20 So hear the word of the LORD, all you of the captivity, whom I have sent from Jerusalem to Babylon: 21 The LORD of hosts, the God of Israel says this of Ahab the son of Kolaiah, and of Zedekiah the son of Maaseiah, who prophesy a lie to you in my name; Behold, I will deliver them into the hand of Nebuchadrezzar king of Babylon; and he will kill them before your eyes; 22 And a curse will be taken up about them by all the captivity of Judah who are in Babylon, saying, The LORD make you like Zedekiah and like Ahab, whom the king of Babylon roasted in the fire.

God is a witness

23 Because they have committed villainy in Israel, and have committed adultery with their neighbors' wives, and have spoken lying words in my name, which I have not commanded them; I know, and am a witness, says the LORD.

24 Speak this to Shemaiah the dreamer, saying, 25 The LORD of hosts, the God of Israel says, Because you have sent letters in your name to all the people that are at Jerusalem, and to Zephaniah the son of Maaseiah the priest, and to all the priests, saying, 26 The LORD has made you priest in the place of Jehoiada the priest, that you should be officers in the house of the LORD, for every man that is insane, and makes himself a prophet, that you should put him in prison, and in the stocks. 27 Now therefore why have you not reproved Jeremiah of Anathoth, who makes himself a prophet to you? 28 He sent to us in Babylon, saying, This captivity is long: build houses, and dwell in them; and plant gardens, and eat the fruit of them. 29 And Zephaniah the priest read this letter in the ears of Jeremiah the prophet.

God is going to do good to His people

30 Then the word of the LORD came to Jeremiah, saying, 31 Send to all those of the captivity, saying, The LORD says this concerning Shemaiah the Nehelamite; Because Shemaiah has prophesied to you, and I did not send him, and he caused you to trust in a lie: 32 The LORD says this; Behold, I will punish Shemaiah the dreamer, and his seed: he will not have a man to dwell among this people; neither will he see the good that I will do for my people, says the LORD; because he has taught revolt against the LORD.