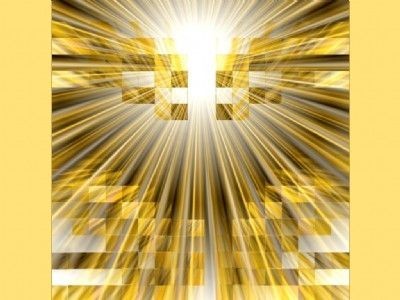 1 And on one of those days, as he taught the people in the temple, and preached the good news, the chief priests and the scribes came with the elders 2 and spoke to him saying, Tell us, by what authority you do these things? Who gave you this authority?

3  And he answered and said to them, I also will ask you one thing; answer me: 4 The baptism of John, was it from heaven, or of men? 5 And they reasoned with themselves saying, If we say, From heaven; he will say, Why then did you not believe him? 6 But and if we say, Of men; all the people will stone us: for they are persuaded that John was a prophet. 7 And they answered that they could not tell where it was from. 8 And Jesus said to them, Neither do I tell you by what authority I do these things. 9 Then he began to speak to the people this parable; A certain man planted a vineyard, and rented it out to vinedressers, and went into a far country for a long time. 10 And in time he sent a servant to the vinedressers, to give him from the fruit of the vineyard: but the vinedressers beat him and sent him away empty. 11 And again he sent another servant: and they beat him also, and insulted him, and sent him away empty. 12 And again he sent a third: and they wounded him also, and threw him out. 13 Then the lord of the vineyard said, What am I to do? I will send my beloved son: it may be that they will reverence him when they see him. 14 But when the vinedressers saw him, they reasoned among themselves, saying, This is the heir: come, let’s kill him, that the inheritance may be ours. 15 So they threw him out of the vineyard, and killed him. What therefore will the lord of the vineyard do to them? 16 He will come and destroy these vinedressers, and give the vineyard to others. And when they heard it, they said, God forbid. 17 And he looked at them and said, What is this then that is written, The stone which the builders rejected, the same is become the head of the corner? 18 Whoever falls on that stone will be broken; but on whoever it falls, it will grind him to powder.

19  And the chief priests and the scribes tried to lay hands on him that same hour; but they feared the people: for they knew that he had spoken this parable against them. 20 And watching him carefully they sent out spies pretending to be righteous so that they might catch him in some statement in order that they might deliver him to the power and authority of the governor. 21 And they asked him saying, Teacher, we know that you speak and teach rightly, neither accept the person of any, but teach the way of God in truth: 22 Is it lawful for us to give tribute to Caesar, or not? 23 But he perceived their slyness and said to them, Why do you tempt me? 24 Show me a denarius. Whose image and inscription does it have? They answered and said, Caesar’s. 25 And he said to them, Then render to Caesar the things that are Caesar’s, and to God the things that are God’s. 26 And they were unable to catch him in his words before the people: and they marveled at his answer, and held their peace.

Jesus will raise the dead to life: all will live to Him

27 Then certain of the Sadducees came to him, who deny that there is any resurrection; and they asked him, 28 saying, Master, Moses wrote to us, If any man’s brother dies, having a wife, and he dies without children, that his brother should take his wife, and raise up seed to his brother. 29 There were seven brothers: and the first took a wife, and died without children. 30 And the second took her to wife, and he died childless. 31 And the third took her; and in the same way the seven also: and they left no children, and died. 32 Last of all, the woman died. 33 Therefore in the resurrection whose wife is she? For seven had her as wife. 34 And answering Jesus said to them, The children of this world marry, and are given in marriage: 35 But those counted worthy to obtain that world, and the resurrection from the dead, neither marry, nor are given in marriage: 36 Neither can they die any more: for they are equal to the angels; and are the children of God, being the children of the resurrection. 37 Now that the dead are raised, even Moses showed at the bush, when he called the Lord the God of Abraham, and the God of Isaac, and the God of Jacob. 38 For he is not a God of the dead, but of the living: for all live to him.

39  Then certain of the scribes answering said, Master, you have spoken well. 40 And after that they did not dare ask him any question at all. 41 And he said to them, How do they say that Christ is David’s son? 42 And David himself said in the book of Psalms, The LORD said to my Lord, You sit at my right hand, 43 Until I make your enemies your footstool. 44 Since David then calls him Lord, how is he his son

45  Then in the audience of all the people he said to his disciples, 46 Beware of the scribes, who desire to walk in long robes, and love greetings in the markets, and the highest seats in the synagogues, and the best rooms at feasts; 47 Who devour widows’ houses, and for a show make long prayers: the same will receive greater damnation.

1 And He looked up, and saw the rich men casting their gifts into the treasury. 2 And he also saw a certain poor widow casting in two mites.  3 And he said, Truly I tell you that this poor widow has cast in more than all of them: 4 For all these from their abundance have cast in to the offerings of God: but she of her lack has cast in all the living that she had.

Jesus promised to be with us in the end times

5  And as some spoke of the temple, how it was adorned with beautiful stones and gifts, he said, 6 These things that you see, the days will come when not one stone will be left on another, that will not be thrown down. 7 And they asked him, saying, Teacher, when will these things be? And what will be the sign when these things will happen? 8 And he said, Watch out that you not be led astray: for many will come in my name, saying, I AM; and the time has come: do not go after them. 9 As you hear of wars and disturbances do not be afraid: for these things must first come to pass; but the end is not at once. 10 Then said he to them, Nation will rise up against nation, and kingdom against kingdom: 11 And great earthquakes will be in various places, and famines, and plagues and terrors and there will be great signs from heaven. 12 But before all these, they will arrest you, and persecute you, delivering you up to the synagogues, and into prisons, being led away before kings and rulers for my name’s sake. 13 But it will return to you for a testimony. 14 Settle it in your hearts, not to premeditate to make a defense: 15 For I will give you a mouth and wisdom, which all those opposing you will not be able to withstand or resist.

16  You will be betrayed by parents and brothers, by relatives and friends; they will execute some of you. 17 All men will hate you for my name’s sake. 18 But not a hair of your head will perish. 19 In your patience you will gain your souls.

20  And when you see Jerusalem surrounded by armies, know that its desolation is near. 21 Then let those that are in Judea flee to the mountains; and let those who are in the midst of it get out; and do not let those that are in the countries enter in there. 22 For these are the days of vengeance, that all things that are written may be fulfilled. 23 But woe to them that are with child, and to them that give suck, in those days! For there will be great distress in the land and wrath on this people. 24 And they will fall by the edge of the sword, and be led away captive into all nations: and Jerusalem will be trampled down by the nations, until the times of the nations are fulfilled.

25  And there will be signs in the sun, and in the moon, and in the stars; and on the earth distress of nations, with perplexity; the sea and the waves roaring; 26 Men’s hearts failing them for fear and expectation of those things that are coming on the habitable earth: for the powers of heaven will be shaken.

27  And then they will see the Son of man coming in a cloud with power and great glory. 28 And when these things begin to happen, look up and lift up your heads; for your redemption draws near. 29 And he spoke to them a parable; Behold the fig tree, and all the trees; 30 When they sprout leaves, you see and know for yourselves that summer is near. 31 So also, when you see these things come to pass, you know that the kingdom of God is near. 32 I tell you the truth, This generation will not pass away until all is fulfilled. 33 Heaven and earth will pass away: but my words will not pass away.

34  And take heed to yourselves, lest at any time your hearts be loaded down with headaches, drunkenness, and anxieties of this life, so that day comes upon you suddenly. 35 For it will come as a snare on all those that dwell on the face of the whole earth. 36 Be watchful, begging that you may be counted worthy to escape all these things about to occur, and to stand before the Son of man. 37 And in the daytime he was teaching in the temple; and at night he went out, and stayed in the mountain that is called the mount of Olives. 38 And all the people came early in the morning to him in the temple, to hear him.