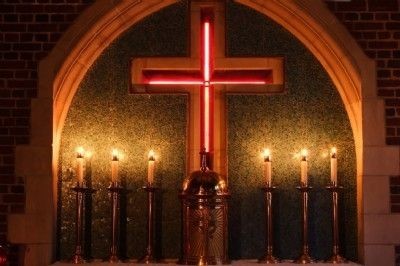 1 And you are to make an altar of acacia wood 7 1/2 feet long, and 7 1/2 feet wide; the altar will be square: and its height will be 4 1/2 feet. 2 Make a horn at each of the four corners of the altar so the horns and altar are all one piece. Overlay the altar and its horns with bronze. 3 And make its ash buckets, its shovels, its basins, its flesh hooks, and its fire pans, all its utensils of bronze. 4 Make a bronze grating with a bronze ring at each of its four corners. 5 Fit the grating halfway down into the firebox, resting it on the ledge built there. 6 And you will make poles for the altar, poles of acacia wood, and overlay them with bronze. 7 And the poles will be put into the rings on the two sides of the altar, to carry it.

8 Make it hollow with planks as he caused you to see in the mountain; that is how they are to make it. 9 And you will make the court of the tabernacle: for the south side southward there will be hangings for the court of finely twisted linen 150 feet for one side: 10 Its twenty pillars and their twenty sockets will be of bronze; the hooks of the pillars and their sockets will be silver. 11 It will be the same on the north side of the courtyard—150 feet of curtains held up by twenty posts fitted into bronze bases, with silver hooks and rods.

God’s light to the world never goes out

12 The curtains on the west end of the courtyard will be 75 feet long, supported by ten posts set into ten bases. 13 And the width of the court on the east side eastward will be 75 feet long. 14 The courtyard entrance will be on the east end, flanked by two curtains. The curtain on the right side will be 22 1/2 feet long, supported by three posts set into three bases. 15 The curtain on the left side will also be 22 1/2 feet long, supported by three posts set into three bases. 16 For the entrance to the courtyard, make a curtain that is 30 feet long. Fashion it from finely twisted linen, and decorate it with beautiful embroidery in blue, purple, and scarlet. It will be attached to four posts that fit into four bases. 17 All the pillars around the court will be finished with silver bands; their hooks will be of silver, and their sockets of bronze. 18 The length of the court will be 150 feet, and 75 feet wide everywhere, and curtains 7 1/2 feet high of finely twisted linen, and their sockets bronze. 19 All the vessels of the tabernacle in all its service, and all its tent pegs, and all the pins of the court, will be of bronze. 20 And you will command the children of Israel to bring you pure beaten oil olive for the light, to keep the lamp always burning. 21 In the tabernacle of the congregation outside the veil, which is before the testimony, Aaron and his sons will keep it in order from evening to morning before the LORD: it will be a statute forever to their generations on the behalf of the children of Israel.

The LORD appointed Aaron and his sons as  priests

12 Put the two stones on the shoulders of the ephod for stones of memorial to the children of Israel: and Aaron will bear their names before the LORD for a memorial on his two shoulders.

13 You will make settings of gold 14 with two chains of pure gold at the ends. Make them of woven cord work and fasten the corded chains to the filigree settings. 15 And make the breastplate of judgment with skillful work; make it like the work of the ephod, of gold, blue, purple, scarlet, you are to make it of finely twisted linen. 16 It is to be square and doubled; a span long and a span wide. 17 Set in it settings of stones, four rows of stones: the first row will be a sardius/ruby, a topaz, and a carbuncle: this will be the first row. 18 And the second row will be an emerald, a sapphire, and a diamond. 19 And the third row a ligure, an agate, and an amethyst. 20 And the fourth row a beryl, and an onyx, and a jasper: they will be set in gold in their settings.

30 And put in the breastplate of judgment the Urim and the Thummim; and they will be on Aaron’s heart, when he goes in before the LORD: and Aaron will bear the judgment of the children of Israel upon his heart before the LORD continually.

31 And you will make the robe of the ephod all of blue. 32 And there will be an opening in the top of it, in the middle: it will have a binding of woven work around its opening, like the hole of a habergeon, so that it not be torn. 33 And beneath it on its hem you will make pomegranates of blue, purple, and scarlet, around its hem; and bells of gold between them all around: 34 A golden bell and a pomegranate, a golden bell and a pomegranate, on the hem around the robe. 35 And it will be on Aaron to minister: and his sound will be heard when he goes in unto the holy place before the LORD, and when he comes out so that he not die. 36 And you will make a plate of pure gold, and engrave upon it, like the engravings of a signet, HOLINESS TO THE LORD.

37 And you will put it on a blue lace to hold it on the turban; it will be on the front of the turban. 38 It will be on Aaron’s forehead, that Aaron may bear the iniquity of the holy things which the children of Israel will hallow in all their holy gifts; and it will always be on his forehead, that they may be accepted before the LORD.

39 And you will embroider the coat of fine linen, and make the turban of fine linen, and make the belt of needlework. 40 Make coats for Aaron’s sons, and make belts for them and make caps for them, for glory and for beauty. 41 And put them on Aaron your brother, and his sons with him; and anoint them, and consecrate them, and sanctify them so that they may minister to me in the priest’s office. 42 And make them linen drawers to cover their nakedness; they will reach from the loins to the thighs: 43 And they will be on Aaron, and on his sons, when they come into the tabernacle of the congregation, or when they come near the altar to minister in the holy place so that they not bear iniquity and die: it will be a statute forever to him and his seed after him.

1 And this is the thing that you are to do to them to set them apart/make them holy, to minister to me in the priest’s office: Take one young bull and two rams without blemish, 2 And unleavened bread, and unleavened cakes mixed with oil, and unleavened wafers spread with oil: make them of fine wheat flour. 3 And put them into one basket, and bring them in the basket with the bull and the two rams. 4 And you will bring Aaron and his sons to the door of the tabernacle of the congregation and will wash them with water. 5 And take the garments, and put on Aaron the coat, the robe of the ephod, the ephod, and the breastplate, and wrap him with the skillfully woven belt of the ephod:

21 And you will take from the blood that is on the altar, and from the anointing oil, and sprinkle it on Aaron, on his garments, on his sons, and on the garments of his sons with him: and he will be made holy, and his garments, and his sons, and his sons’ garments with him. 22 Also take the fat and the rump from the ram, and the fat that covers the innards, and the midriff above the liver, and the two kidneys, and the fat that is on them, and the right shoulder; for it is a ram of consecration: 23 And one loaf of bread, and one cake of oiled bread, and one wafer out of the basket of the unleavened bread that is before the LORD: 24 And put it all in the hands of Aaron, and in the hands of his sons; and wave them for a wave offering before the LORD. 25 And you will receive them of their hands, and burn them on the altar for a burnt offering for a sweet aroma before the LORD: it is an offering made by fire unto the LORD. 26 And take the breast of the ram of Aaron’s consecration, and wave it for a wave offering before the LORD: and it will be your part.

27 Set aside as holy the parts of the ordination ram that belong to Aaron and his sons. This includes the breast and the thigh that were lifted up before the LORD in the ordination ceremony. 28 And it will be Aaron’s and his sons’ by a statute forever from the children of Israel: for it is a heave offering: and it will be a heave offering from the children of Israel of the sacrifice of their peace offerings, even their heave offering to the LORD. 29 And the holy garments of Aaron will be his sons’ after him, to be anointed in, and to be consecrated in them. 30 And that son that is priest in his place will put them on seven days, when he comes into the tabernacle of the congregation to minister in the holy place. 31 And you will take the ram of the consecration, and boil its flesh in the holy place. 32 And Aaron and his sons will eat the flesh of the ram, and the bread that is in the basket, by the door of the tabernacle of the congregation. 33 And they will eat those things with which the atonement was made, to consecrate and to sanctify them: but a foreigner is not to eat of it because they are holy. 34 And if any of the flesh of the consecrations, or of the bread remains until the morning, then you will burn the remainder with fire: it will not be eaten because it is holy. 35 You will do this to Aaron and to his sons, according to all things that I have commanded you: seven days will you consecrate them.

36 And every day you will offer a bull for a sin offering for atonement: and you will cleanse the altar, when you have made atonement for it you will anoint it to sanctify it. 37 Seven days you are to make atonement for the altar to sanctify it; it will be a most holy altar: whatever touches the altar will be holy. 38 Now this is what you will offer on the altar; two lambs of the first year day by day continually. 39 You will offer the one lamb in the morning; and you will offer the other lamb at evening: 40 And with the one lamb a tenth measure of flour mingled with the fourth part of an hin of beaten oil; and the fourth part of an hin of wine for a drink offering. 41 And you will offer the other lamb at evening, and will do to it according to the food offering of the morning and like its drink offering for a sweet aroma, an offering made by fire to the LORD. 42 This will be a continual burnt offering throughout your generations at the door of the tabernacle of the congregation before the LORD: where I will meet you, to speak there to you. 43 And I will meet there with the children of Israel, and the tabernacle will be sanctified by my glory.