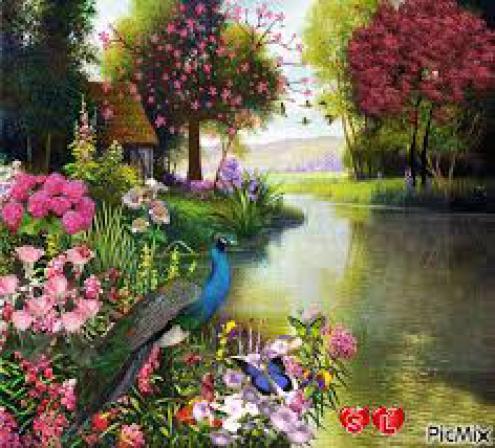 1 Now the LORD had said to Abram, Get out of your country, and away from your relatives, and from your father's house to a land that I will show you: 2 And I will make of you a great nation, and I will bless you, and make your name great; and you will be a blessing: 3 And I will bless those that bless you, and curse him that curses you: and in you all families of the earth will be blessed. 4 So Abram departed, as the LORD had spoken to him; and Lot went with him: Abram was 75 years old when he left Haran.

God brought Abram to the glory of all lands

5 And Abram took Sarai his wife, and Lot his brother's son, and all their substance that they had gathered, and the souls they had gotten in Haran; and they left to go into the land of Canaan; and they came into the land of Canaan. 6 And Abram passed through the land to the place of Shechem, to the plain of Moreh. The Canaanite was in the land then. 7 And the LORD appeared to Abram, and said, I will give this land to your seed: and he built an altar there to the LORD, who appeared to him. 8 And he moved from there to a mountain on the east of Bethel, and pitched his tent, having Bethel on the west, and Hai on the east: and there he built an altar to the LORD, and called on the name of the LORD.

9 And Abram journeyed, going on toward the south. 10 And there was a famine in the land: and Abram went down into Egypt to turn aside there; for the famine was in the land grievous. 11 And when he came near to enter Egypt he said to Sarai his wife, Look, I know that you are a beautiful woman to look at.12 So when the Egyptians see you they will say, This is his wife: and they will kill me, but they will keep you alive. 13 I beg you, say you are my sister: so that it may go well with me for your sake; and my soul will live because of you. 14 And it happened, when Abram came into Egypt, the Egyptians saw that the woman was very beautiful. 15 And the princes of Pharaoh saw her, and praised her before Pharaoh: and the woman was taken into Pharaoh's house. 16 And he treated Abram well for her sake: and he had sheep, oxen, he asses, menservants, maidservants, she asses, and camels.

17 And the LORD struck Pharaoh and his house with great plagues because of Sarai Abram's wife. 18 And Pharaoh called Abram, and said, What is this that you have done to me? Why didn’t you tell me that she was your wife? 19 Why did you say, She is my sister? I might have taken her to me as wife: now here’s your wife, take her and go. 20 And Pharaoh commanded his men concerning him: and they sent him away, and his wife, and all that he had.

1 And Abram went up out of Egypt, he, his wife, and all that he had, and Lot with him, into the south. 2 And Abram was very rich in livestock, in silver, and in gold. 3 And he went on his journeys from the south to Bethel, to the place where his tent had been at the beginning, between Bethel and Hai; 4 to the place of the altar that he had made there at first: and there Abram called on the name of the LORD.

5 And Lot, who went with Abram, also had flocks, herds, and tents. 6 And the land was not able to bear them dwelling together because their substance was so great that they could not dwell together. 7 And there was strife between those tending Abram's livestock and those tending Lot's livestock: and the Canaanite and the Perizzite dwelled in the land then. 8 And Abram said to Lot, Please do not let there be strife between you and I, and between my herdsmen and your herdsmen; for we are brothers. 9 Is not the whole land before you? Please separate yourself from me: if you will take the left hand, then I will go to the right; or if you depart to the right hand, then I will go to the left.

10 And Lot lifted up his eyes, and saw all the circuit of Jordan, that it was well watered everywhere before the LORD destroyed Sodom and Gomorrah, like the garden of the LORD, like the land of Egypt, as you come to Zoar. 11 Then Lot chose for himself all the circuit of Jordan; and Lot journeyed east: and they separated themselves the one from the other. 12 Abram dwelled in the land of Canaan, and Lot dwelled in the cities of the plain, and pitched his tent toward Sodom.

13 But the men of Sodom were exceedingly wicked and sinners before the LORD. 14 And the LORD said to Abram, after Lot was separated from him, Now lift up your eyes and look from the place where you are north, south, east, and west: 15 For all the land that you see, I will give it to you, and to your seed forever. 16 And I will make your seed like the dust of the earth: so that if a man can count the dust of the earth, then your seed also will be counted.

17 Get up, walk through the land its length and its breadth; for I will give it to you. 18 Then Abram moved his tent, and came and dwelt in the plain of Mamre, which is in Hebron, and built an altar there to the LORD.

1 And it happened in the days of Amraphel king of Shinar, Arioch king of Ellasar, Chedorlaomer king of Elam, and Tidal king of nations; 2 That these kings made war with Bera king of Sodom, with Birsha king of Gomorrah, Shinab king of Admah, Shemeber king of Zeboiim, and the king of Bela, which is Zoar. 3 All these were joined together in the valley of Siddim, which is the salt sea. 4 Twelve years they served Chedorlaomer, and in the thirteenth year they rebelled. 5 And in the fourteenth year Chedorlaomer came, and the kings that were with him, and struck down the Rephaims in Ashteroth Karnaim, the Zuzims in Ham, the Emims in Shaveh Kiriathaim, 6 And the Horites in their mount Seir, unto Elparan, which is by the wilderness. 7 And they returned, and came to Enmishpat, which is Kadesh, and struck all the country of the Amalekites, and also the Amorites, that dwelt in Hazezon-tamar.

13 And one came that had escaped and told Abram the Hebrew; for he dwelt in the plain of Mamre the Amorite, brother of Eshcol and brother of Aner: these were allies with Abram. 14 And when Abram heard that his brother was taken captive, he armed his trained servants, born in his own house, 318, and pursued them to Dan. 15 And he divided himself against them, he and his servants, by night, and struck them down, and chased them to Hobah, which is to the left of Damascus. 16 And he brought back all the goods, and also brought his brother Lot, his goods, the women also, and the people.

The Most High God is possessor of heaven and earth

17 And the king of Sodom went out to meet him after his return from the slaughter of Chedorlaomer, and of the kings that were with him, at the valley of Shaveh, which is the king's dale. 18 And Melchizedek king of Salem brought out bread and wine: he was the priest of the Most High God. 19 And he blessed him, and said, Blessed be Abram of the most high God, possessor of heaven and earth: 20 And blessed be the most high God, who has delivered your enemies into your hand. And he gave him tithes/tenths of all.

21 And the king of Sodom said to Abram, Give me the people and take the goods to yourself. 22 And Abram said to the king of Sodom, I have lifted up my hand to the LORD, the Most High God, the possessor of heaven and earth, 23 I will not take from a thread to a shoelace; I will not take anything that is yours, so you cannot say, I have made Abram rich: 24 Except what the young men have eaten, and the portion of the men who went with me, Aner, Eshcol, and Mamre; let them take their portion.