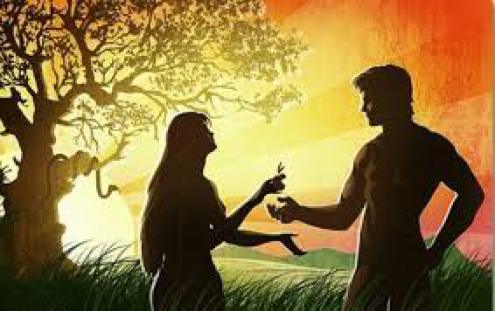 1 Now the serpent was more cunning than any beast of the field that the LORD God had made. And he said to the woman, So, has God said you may not eat of every tree of the garden? 2 And the woman said to the serpent, We may eat of the fruit of the trees of the garden: 3 But of the fruit of the tree that is in the midst of the garden, God has said, Do not eat of it, or touch it, so you not die. 4 And the serpent said to the woman, You won’t die: 5 God knows that the day you eat from it, then your eyes will be opened, and you will be like gods, knowing good and evil. 6 And when the woman saw that the tree was good for food, and that it was pleasant to the eyes, and a tree to be desired to make one wise, she took of its fruit and ate; and also gave to her husband with her and he ate. 7 And the eyes of them both were opened, and they knew they were naked; and they sewed fig leaves together, and made themselves aprons.

11 And he said, Who told you that you were naked? Have you eaten from the tree, of which I commanded you not to eat? 12 And the man said, The woman whom you gave to be with me, she gave me of the tree and I ate. 13 And the LORD God said to the woman, What is this that you have done? And the woman said, The serpent deceived me and I ate.

God promised to rescue them

14 And the LORD God said to the serpent, Because you have done this you are cursed above all beasts, and above every animal of the field; you will walk on your belly, and you will eat dust all the days of your life: 15 And I will put hatred between you and the woman, and between your seed and her seed; it will break your head, and you will break his heel.

16 To the woman he said, I will greatly multiply your sorrow and your conception; in sorrow you will bring forth children; and your desire will be to your husband, and he will rule over you. 17 And to Adam he said, Because you have listened to the voice of your wife, and have eaten from the tree, of which I commanded you saying, Do not eat of it: the ground is cursed for your sake; in sorrow will you eat of it all the days of your life; 18 It will sprout thorns and thistles for you; and you will eat the herb of the field; 19 In the sweat of your face will you eat food until you return to the ground; for you were taken out of it: you are dust and you will return to dust. 20 And Adam called his wife's name Eve/living; because she was the mother of all living.

21 And the LORD God made for the man and his wife coats of skins, and clothed them. 22 And the LORD God said, Behold, the man has become like one of us, to know good and evil: now he must not be allowed put out his hand, and take also from the Tree of Life, and eat, and live forever (fallen): 23So the LORD God sent him out of the Garden of Eden to till the ground from which he was taken. 24 He drove the man out; and he fixed Cherubims at the east of the Garden of Eden, and the flaming sword whirling around, to guard the way of the Tree of Life.

God was with them in their fallen state

1 And Adam knew his wife Eve; and she conceived and birthed Cain and said, I have gotten a man with the helpof the LORD. 2 And she continued and birthed his brother Abel. Now Abel  became a shepherd of flocks, but Cain was a tiller of the ground. 3 And at the end of days Cain brought a gift to the LORD from the fruit of the ground. 4 And Abel also brought from the firstlings of his flock and their fat/finest. And the LORD looked to Abel and to his offering: 5 But for Cain and his offering he had no regard. And Cain was furious, and his face fell.

6 And the LORD said to Cain, Why are you furious? And why is your face fallen? 7 If you do well, will you not be exalted/have the excellency? And if you do not do well, sin is crouching at the door to attack and destroy you. You must rule over him. 8 And Cain talked with his brother Abel: and it happened when they were in the field that Cain rose up against his brother Abel and killed him.

9 And the LORD said to Cain, Where is your brother Abel? And he said, I don’t know: Am I my brother's keeper?10 And he said, What have you done? The voice of your brother's blood cries to me from the ground 11 Now you are cursed from the earth that has opened her mouth to receive your brother's blood from your hand. 12 From now on, when you till the ground, she will not yield her strength to you; you will be a fugitive and a wanderer in the earth. 13 And Cain said to the LORD, My punishment is greater than I can bear.

14 Behold, today you have driven me from the face of the earth; and I will be hid from your face; and I will be  a fugitive and a wanderer in the earth; and it will happen that everyone that finds me will kill me. 15 And the LORD said to him, To set right, vengeance will be taken seven times on whoever kills Cain. And the LORD put a mark on Cain, so that anyone finding him would not kill him. 16 And Cain went out from the presence of the LORD, and lived in the land of Nod, on the east of Eden. 17 And Cain knew his wife; and she conceived, and birthed Enoch: and he built a city, and called the name of the city after the name of his son, Enoch. 18 And to Enoch was born Irad: and Irad begat Mehujael: and Mehujael begat Methusael: and Methusael begat Lamech. 19 And Lamech took to himself two wives: the name of one was Adah, and the name of the other Zillah. 20 And Adah birthed Jabal: he was the father of those that live in tents and have livestock. 21 And his brother's name was Jubal: he was the father of all those that handle the harp and organ.

22 And Zillah, she birthed Tubalcain, an instructor of every worker in brass and iron: Naamah was the sister of Tubalcain. 23 And Lamech said to his wives, Adah and Zillah, Hear my voice; you wives of Lamech, listen to my speech: for I have killed a man who attacked me and wounded me. 24 If Cain is avenged seven times, truly Lamech seventy-seven times. 25 And Adam knew his wife again; and she bore a son, and called his name Seth: For she said, God has appointed me another seed instead of Abel who Cain killed. 26 And to Seth also a son was born; and he called his name Enos: then began men to call on the name of the LORD.

1 This is the book of the generations of Adam. In the day that God created man, in the likeness of God he made him. 2 He created male and female and blessed them, and called their name Adam/man, in the day they were created. 3 And Adam lived 130 years, and begat a son in his own likeness, after his image; and called his name Seth: 4 And the days of Adam after he had begat Seth were 800 years: and he begat sons and daughters: 5 And all the days that Adam lived were 930 years: and he died.