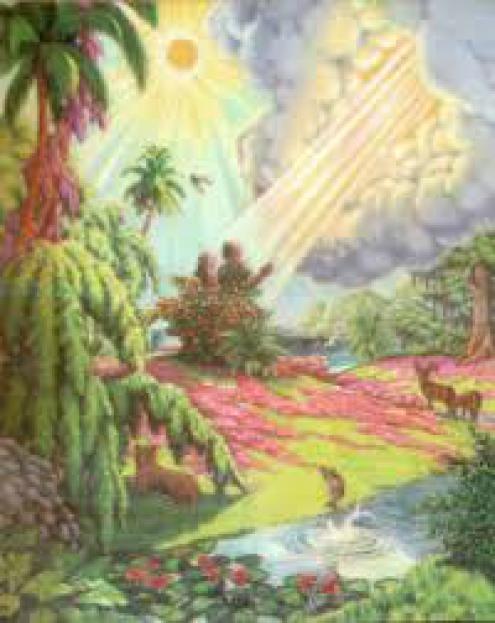 1 And God blessed Noah and his sons, and said to them, Be fruitful, and multiply, and fill the earth. 2 And the fear of you and the dread of you will be on every animal of the earth, and on every bird of the air, on all that moves on the earth, and on all the fish of the sea; they are delivered into your hand. 3 Every moving thing that lives will be your food; just as the green herb I have given you all things. 4 Only do not eat flesh with its life, its blood.

7 And you, be fruitful and multiply; bring forth abundantly in the earth and multiply in it. 8 And God spoke to Noah, and to his sons with him, saying, 9 And I, behold, I establish my covenant with you, and with your seed after you; 10 And with every living creature that is with you of the birds, of the cattle, and of every beast of the earth with you; all that go out of the ark, to every beast of the earth. 11 And I will establish my covenant with you; and never again cut off all flesh by the waters of a flood or destroy the earth by the waters of a flood.

God gave the rainbow as the sign of His promise

18 And the sons of Noah that went out of the ark were Shem, Ham, and Japheth: Ham is the father of Canaan. 19 These are the three sons of Noah: and by them the whole earth was overspread.

20 And Noah began farming, and he planted a vineyard: 21 And he drank of the wine and was drunk; and he was uncovered within his tent. 22 And Ham, the father of Canaan, saw the nakedness of his father, and told his two brothers outside. 23 And Shem and Japheth took a garment, and laid it on both their shoulders, and went backward and covered the nakedness of their father; and their faces were backward so they did not see their father's nakedness. 24 And Noah woke up from his wine and realized what his younger son had done to him. 25 And he said, Cursed be Canaan; he will be a servant of servants to his brothers. 26 And he said, Blessed be the LORD God of Shem; and Canaan will be his servant. 27 God will enlarge Japheth, and he will dwell in the tents of Shem; and Canaan will be his servant. 28 And Noah lived 350 years after the flood. 29 And all the days of Noah were 950 years: and he died.

1 Now these are the generations of the sons of Noah, Shem, Ham, and Japheth: and sons were born to them after the flood. 2 The sons of Japheth; Gomer, Magog, Madai, Javan, Tubal, Meshech, and Tiras. 3 And the sons of Gomer; Ashkenaz, Riphath, and Togarmah. 4 And the sons of Javan; Elishah, Tarshish, Kittim, and Dodanim. 5 By these were the coastlands of the Gentiles divided in their lands; every one after his tongue, after their families, in their nations.

6 And the sons of Ham; Cush, Mizraim, Phut, and Canaan. 7 And the sons of Cush; Seba, Havilah, Sabtah, Raamah, and Sabtecha: and the sons of Raamah; Sheba, and Dedan. 8 And Cush begat Nimrod: he began to be a mighty one in the earth.

All life is before God

11 And from that land he went into Assyria and built Nineveh, and the city Rehoboth and Calah, 12 And Resen between Nineveh and Calah: the same is a great city. 13 And Mizraim begat Ludim, Anamim, Lehabim, Naphtuhim, 14 Pathrusim, Casluhim, (out of whom came Philistim (Philistines), and Caphtorim.15 And Canaan begat Sidon his firstborn, Heth, 16 And the Jebusite, the Amorite, the Girgasite, 17 the Hivite, the Arkite, and the Sinite, 18 the Arvadite, the Zemarite, and the Hamathite: and afterward the families of the Canaanites were spread abroad. 19 And the border of the Canaanites was from Sidon, as you come to Gerar, to Gaza; as you go to Sodom, Gomorrah, Admah, Zeboim, even to Lasha. 20 These are the sons of Ham, after their families, after their tongues, in their countries, and in their nations.

21 Unto Shem also, the brother of Japheth the elder, the father of all the children of Eber, children were born to him. 22 The children of Shem; Elam, Asshur, Arphaxad, Lud, and Aram. 23 And the children of Aram; Uz, Hul, Gether, and Mash. 24 And Arphaxad begat Salah; and Salah begat Eber. 25 And two sons were born to Eber: the name of one was Peleg for in his day the earth was divided; and his brother's name was Joktan.

1 And the whole earth was one language and one speech. 2 And it happened as they journeyed from the east, that they found a plain in the land of Shinar; and they lived there. 3 And they said to one another, Come, let us make bricks and burn them thoroughly. And they had brick for stone, and they had bitumen for morter. 4 And they said, Come, let us build us a city and a tower, whose top may reach to heaven; and let us make a name for ourselves, so that we will not be scattered abroad on the face of the whole earth.

God stopped mans plan so that God’s plan would continue

5 And the LORD came down to see the city and the tower that the children of men built. 6 And the LORD said, Behold, the people are united, and they all have one language; and they begin to do this: now nothing will be restrained from them that they have imagined to do. 7 Come, let us go down there and confuse their language, so that they will not understand one another's speech. 8 So the LORD scattered them abroad from there on the face of all the earth: and they stopped building the city. 9 So the name of it was called Babel/confusion; because the LORD confused the language of all the earth: and from there the LORD scattered them abroad on the face of all the earth.

26 And Terah lived 70 years, and begat Abram, Nahor, and Haran. 27 Now these are the generations of Terah: Terah begat Abram, Nahor, and Haran; and Haran begat Lot. 28 And Haran died before his sire Terah in the land of his nativity, in Ur of the Chaldees. 29 And Abram and Nahor took wives for themselves: the name of Abram's wife was Sarai; and the name of Nahor's wife, Milcah, the daughter of Haran, the sire of Milcah, and the sire of Iscah. 30 But Sarai was barren; she had no child.

31 And Terah took Abram his son, and Lot the son of Haran, his grandson, and Sarai his daughter in law, his son Abram's wife; and they went out together from Ur of the Chaldees, to go to the land of Canaan; and they came to Haran, and lived there. 32 And the days of Terah were 205 years: and Terah died in Haran.